From 1938 to 1979, Wye Plantation was owned by the late Mr. Arthur A. Houghton, Jr. Houghton and Mr. James B. (Jim) Lingle, Farm Manager, founded the herd with 18 registered yearling heifers and one bull. Ten of those heifers were half-sisters, sharing the same sire.  No other females were ever introduced into the herd.  Between 1942 and 1958, Wye Plantation imported 19 bulls from the British Isles.  Those bulls are responsible for about 75 percent of the germ plasm now in the herd. The Wye Angus herd was closed to the introduction of additional germ plasm in 1958. It was reopened for a brief period to half of the herd in order to complete a research project.  It has remained closed ever since.

The availability of this closed breeding population provides unique advantages in terms of conducting basic and applied beef cattle research.  Individual animal variation, due to genetics, is significantly reduced which improves the interpretation of research results.  In addition, the use of a limited number of bulls across a fairly homogeneous population of females results in larger numbers of individual sire groups of calves for study.  Whenever individual variation can be reduced, the significance of scientific findings is improved.

The University of Maryland established its first official presence at Wye Plantation in 1954.  In the fall of that year, Dr. Willard Green agreed to supervise the first post-weaning  gain test of bulls on the farm, and bulls have been similarly tested ever since.  This work by Dr. Green founded one of the most comprehensive beef cattle performance evaluation programs in the United States.  These efforts led to a vastly improved selection of superior sires from which Wye Angus established a lasting impact on the genetic make up of the national Angus herd.  Through Dr. Green, the University of Maryland was involved in various research projects at Wye Plantation until his retirement in 1977.

Within the University System of Maryland, the Maryland Agricultural Experiment Station was charged with managing the herd on a daily basis and it continues to do so today.  With acceptance of the herd gift, the University agreed to make any animals deemed excess to research needs available for the general public in some equitable fashion. The agreement to the annual public auction of Wye Angus cattle held each April since 1978.

The Breed of Noble Bloods, By James B. Lingle 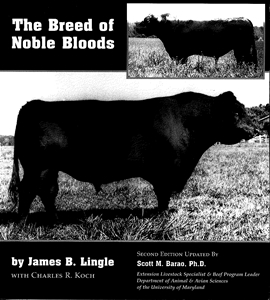 In the words of the master breeder himself, James B. Lingle, The Breed of Noble Bloods relates the development of the Wye herd from the time of the acquistion of the historic Wye Plantation by Arthur A. Houghton, Jr. in the mid 1930's until the present apex of its achievements.  This is the story of an outstanding herd that was built not by great infusions of capital but by the far-sighted and well directed efforts of a breeder-manager who was given full rein by his principal.

Call or email with your order:

Dr. Jiuzhou Song started a research project in the fall of 2011 examining the effects of how finishing cattle on an alfalfa and orchard grass diet alters the epigenetic status of genes affecting beef quality and the fatty acid profile.  The ultimate goal of this research project is to develop methods that beef producers can use through dietary interventions to produce a highly palatable and nutritious product.

Dr. Zhenjjuo Xiao has initiated a project involving Ostertagia  Ostertagi, the most economically important gastrointestinal nematode parasite in the cattle industry.  He will be comparing parasite levels in both our grain fed steers and grass fed steers.